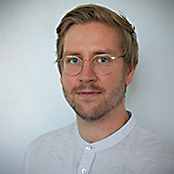 Tim Rottleb studied Middle Eastern Studies with a focus on Political Science which was followed by a M.A. in Politics and Economics of the Middle East, both at Philipps University in Marburg. During his studies he was mainly interested in researching EU-MENA relations as well as societal conflicts in Arabic countries and their urban dimension. His M.A. thesis explored the interrelation of contested public space in Cairo and processes of urban development as a material-spatial condensation of class antagonisms in Egypt. While studying in Marburg, he worked as a research assistant at the research project “Re-configurations” at the Center for Near and Middle Eastern Studies. In addition, he has gained experience in the field of international development by working for UN-Habitat in Cairo and the UN World Food Programme in Berlin.

Since May 2018 he has been working as a research associate for the department “Dynamics of Economic Spaces” in the Junior Research Group “Constructing Transnational Spaces of Higher Education: International Branch Campus Development at the Interface of Network and Territorial Embeddedness”. His dissertation project questions why transnational education zones are established in cities in the Arab Gulf sub-region and how they are embedded in urban and economic development strategies. More info.